Kotlin is a better Java and it is the main way to create apps for Android. What better time could there be to find out what it is and how to use it? 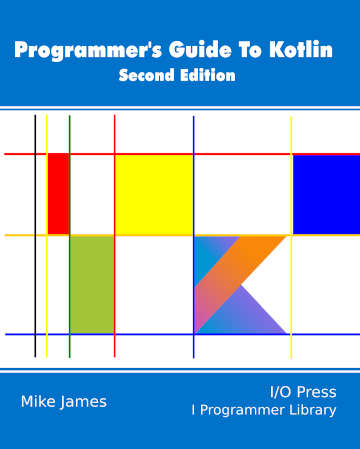 You can buy it from: Amazon

There are some very basic aspects of Kotlin that you will encounter as soon as you start programming. This chapter introduces these in the rough order that you are likely to encounter them when you first try to read a Kotlin example program. As such it is slightly less logically organized and not as complete as subsequent chapters in order to answer your questions as soon as possible. The intent is to give you enough Kotlin to understand most of an example program.

As previously stated, the Kotlin principle is to make use of good compile-time syntax to generate the same run-time code the equivalent Java would have produced. The first thing that you notice is that Kotlin has functions that just “float about” without being attached to any class or object. This isn't the way Java works, as any functions you write in Java have to be part of a class. In other words, in Java all functions are methods. In Kotlin most functions are methods, but some functions are just functions.

In Kotlin you can define package level functions. For example, the simplest version of a hello world program is:

You can see that we define a function using fun and curly brackets. You can also see that :type is how you define the type of a variable. Kotlin is strongly-typed, but the compiler uses type inference and you can leave out type declarations a lot of the time. That is every variable has an assigned type, but often the compiler can deduce its type without you having to state it explicitly.

Most Java programmers moving to Kotlin don't leave out type declarations because it is what they are used to. Sometimes an explicit type declaration makes the code clearer, and sometimes it just makes it look more complex.

All is simple so far, but how can Kotlin support package level functions and still be compatible with Java and the JVM? Easy, they aren't really naked functions. The compiler translates them to static methods of a Java class called packagename.filename, where filename is the name of the file including the Kt. So, if the hello world function given earlier was stored in a file called Hello.kt, the class is demo.HelloKt assuming the package is called demo. This means that to call main from a Java program you would use:

You can change the name of the default class using an annotation:

This use of a default class is how Kotlin implements all other instances of functions that don't seem to belong to a class.

Once you have seen how to declare a function, you can almost guess the rest. You can specify a return type or the special type Unit if it doesn't return a value.

Functions are something that Kotlin excels in and Chapters 10 and 11 are dedicated to explaining all of their features. However, a quick look at any Kotlin code soon reveals some key points.

You can use a single expression to define a function:

You can use default and named arguments:

You can then call the function using:

to get the result 2 or use:

to get the result 3.

You can’t use named parameters to call Java functions.